Need a comprehensive commercial cleaning plan? A friendly Jani-King Business Development Manager will get in touch with a King of Clean solution for your business.

The Invention of the Vacuum Cleaner

The Invention of the Vacuum Cleaner

In 1901, if you were lucky, you might have witnessed a startling scene on the streets of London - one which would quickly revolutionise how we clean our homes and businesses today.

Engineer Hubert Cecil Booth was rolling his new vacuum cleaner onto the wealthier streets of the town.

In 1901 Hubert turned his sill from designing suspension bridges to that of carpet cleaning after witnessing the demonstration of a new machine at London's Empire Music Hall.

He realised that the machine on display had a fatal flaw.  It was designed to blow out air in the hope of raising the dust from the carpet and into the collecting bag.  The inventor told him that the method Booth suggested instead - sucking up the dirt through a filter - was impossible.

Challenge accepted, Booth set off on a mission to produce a machine that would suck, not blow.

After allegedly near-fatal tests - in which he choked after putting a handkerchief 'filter' over his mouth and sucking up dust from the arm of a chair - Booth formed the British Vacuum Cleaner Company and launched his new device.  This was the huge beast of a machine seen doing the rounds of wealth Londoners'homes at the start of the 20th century.

This horse-drawn vacuum cleaner and its liveried operators arrived at your house, immediately advertising to the neighbourhood that you were holding a 'vacuum tea party'.  A visit wasn't cheap - the cost was the same as the annual wages of a junior domestic maid.

To conduct the miraculous cleaning, long hoses were fed through windows, the petrol-powered motor (and later electric engine) was started and the air was drawn by suction from the hose and nozzles through a filter. 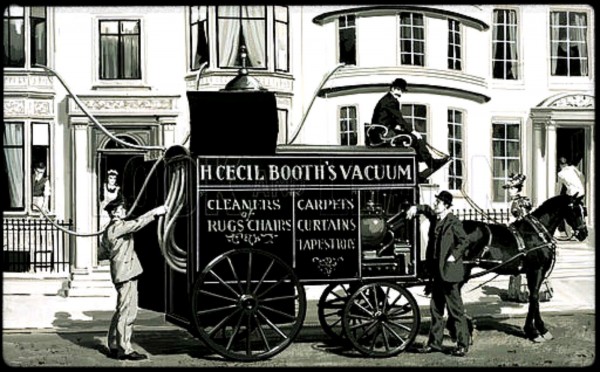 VACUUM CLEANING AS A LUXURY

After a flurry of disapproval and a string of court cases, both against the disruption the machine caused on the streets (including frightening horses) and from a series of disgruntled inventors, Booth finally convinced judge and jury that his powerful machine was the only vacuum cleaner at the time that actually worked.

Cleaning everywhere from Buckingham Palace to the Royal Min and Crystal Palace - where 26 tonnes of dust were removed from the girders during a First World War outbreak of spotted fever - its credentials were soon established as a reliable cleaning machine.

Over time vacuum cleaners got smaller, more portable, and, most importantly, cheaper.  Smaller motor-powered vacuum cleaners, famously from Hoover and Electrolux, began to appear before 1915.

For wealthier households, the annual evacuation so servants could complete their spring cleaning became a thing of the past. Rich homeowners purchased the new vacuum cleaners, eager to be seen as early adopters of the technology, or looking to retain domestic help made scarce by the First World War.

Aren't we appreciative that technological advances allow more practical sized cleaners today - I mean imagine Jani-King having to bring the vacuum cleaner, together with horses and cart to your place of business today! 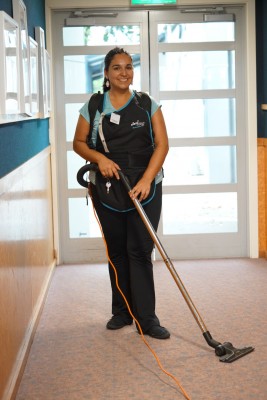 It's cleaning by Mother Nature

Why Probiotics are the future of cleaning